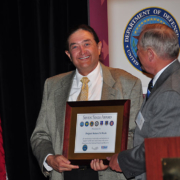 Return To Work Inc. (R2W) President, Rob Brazell, was awarded the Seven Seals Award by Admiral Richard Young and General Thomas Mills at the U.S. Department of Defense’s Employer Support of the Guard and Reserve program (ESGR). The ESGR Seven Seals Award is presented at the discretion of the ESGR State Chair in recognition of significant individual or organization achievement, in addition to initiative or support that promotes and bolsters the ESGR mission. The Seven Seals Award is the only ESGR award that bridges both employer and volunteer recognition awards programs.

Return 2 Work earned the Seven Seals award for its exceptional support of the Military and Veterans Employment Expo (MVEE), held in May 2011. R2W partnered with the ESGR program to create the Military and Veterans Employment Expo in order to 1) address unemployment among National Guardsmen, Reservists and Veterans, 2) provide training on job hunting skills, and 3) hold a job fair featuring over 75 employers from various cities in Colorado.

Numerous volunteers helped to make the employment expo a success. Regarding the tremendous success of MVEE, R2W President Rob Brazell noted, “The military and government reached out…the community reached back. This unprecedented collaboration among several military, government and community partners made a huge difference in the lives of many Colorado veterans and their families.”

R2W continues to provide quality metrics to the array of military and government agencies involved in MVEE, while also participating on the central planning committee for the next employment forum to be announced by the Employer Support of the Guard and Reserve program. Honor Guard for this gala event.