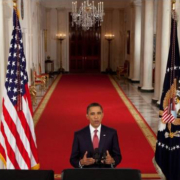 Project: Return to Work Inc. (R2W) founder, Rob Brazell, along with R2W Board Member, Jay D. VanderWerff, attended a daylong White House briefing in Washington, DC. The Obama White House hosted community leaders from states nationwide, highlighting various policies and programs offered by the federal government that are currently available for leaders at the local, grassroots level. The guests were given a tour of the East Wing of the White House and listened to several briefings by community leaders in attendance. The meeting was a forum for leaders nationwide to offer and receive feedback from senior White House officials on critical issues facing the country.

Among the many topics discussed were veteran’s affairs and initiatives to serve disabled Americans, specifically Wounded Warriors. Thus, the mission and objectives of R2W were extensively showcased during this daylong gathering. Moreover, an invitation to this exclusive gathering of community leaders indicates the high priority of veteran’s affairs to the Obama administration while underscoring the notable work R2W has performed since its founding in 1998. Regarding his visit to the White House, R2W President Rob Brazell noted, “This is the most open White House in history. President Obama is clearly reaching out to community leaders around the nation and we are reaching back. We had unprecedented opportunity to give honest and direct feedback. The White House staff is highly experienced and I am grateful for the privilege to participate in such a meaningful way.”

As a result of several recent discussions with the Department of Defense, Department Of Labor, Colorado Department of Labor and Employment, and Colorado National Guard, R2W is changing its fundamental business model to more rapidly respond to the employment needs of thousands of wounded warriors and their families, a stark reality highlighted at both the recent White House briefing and the Military and Veterans Employment Expo held in Golden, CO at Jefferson County Fairgrounds May 23 through 25, 2011.