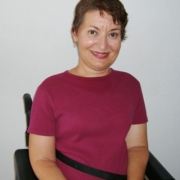 Project: Return to Work Inc. (R2W) is probably best known for helping U.S. veterans to transition back into civilian society via meaningful employment.  Founded in 1998, the Colorado-based non-profit organization has a solid track record of training and placing service people—including wounded warriors with significant disabilities—to perform jobs that best suit their needs and capabilities.

R2W’s mission transcends the veteran segment, however, to include non-military Americans with varying degrees of disability.  Carol Sarganis, a Naples, FL-based Employment Specialist and job coach who was hired by R2W in 2006, is uniquely qualified to fulfill her role with empathy as well as expertise.

“I have the Limb Girdle form of Muscular Dystrophy, which affects the lower extremities,” Sarganis explains.  “I had trouble walking throughout childhood and I have used a wheelchair since high school.”  Despite her lifelong challenges Sarganis feels that she also has had many opportunities, including being able to serve as a remedial reading specialist at the elementary school level for 28 years.  “I’ve always had an innate desire to help people with disabilities,” she says, “and my teaching experience has helped me be effective for R2W’s clients.”

On R2W’s behalf Sarganis became a certified provider of the Federally-funded Division of Vocational Training (DVR).  In this role she helps disabled job seekers in the Naples area with everything from appropriate dress and hygiene advice to transportation to job interviews.  Her clients fall into three tiers: those with multiple disabilities who require significant job support, people who can perform their jobs with some support, and job seekers who can be independent after the initial training period.

Sarganis has learned to adapt her teaching style, including coaching prospective employees on resume preparation and interview skills, to both the capabilities and limitations of each client.  At times this means gently adjusting expectations.  “I have a client named John who wanted to be an animal trainer, but his disabilities precluded this,” she recalls.   In addition to having a borderline IQ, which makes many tasks too difficult, this client suffers from extremely low self- esteem—a trait that contributed to John’s history of quitting jobs after a short time.

Sarganis realized that John needed an unusually high level of affirmation from an employer, and worked to find the right fit for him.

A job bagging groceries at Publix, a large supermarket chain, was the answer for John.  “Publix has a track record of hiring people with special needs, and his supervisors did a great job training him,” Sarganis says.  “This employer is especially good about validating his work and feelings.”  After nearly three years in a full-time position at Publix, Sarganis considers John a success story.

R2W client Pete’s limitations are similar to John’s, but he couldn’t be more different in temperament and attitude.  “He’s outgoing and very self-confident, which is wonderful,” explains Sarganis, “but his extreme chattiness was hurting his employment chances.”  She worked with Pete to build a resume—something she does with every client—and also taught him to curb his loquaciousness, a decidedly more unusual task.  “We’re still working on it,” she says with a laugh.  Having served as a grocery bagger at Winn Dixie since 2010, Pete is now training to become a stock boy.  Sarganis has gotten to know Pete’s family and she notes that his parents, like the vast majority of clients’ parents, strive to help their child become as independent as possible.

Sarganis also has had success placing people who require far less support.  In the case of Michael, who suffered a stroke in his 40s that left him paralyzed on one side, the bulk of her job was providing logistics.  R2W got the ball rolling by helping to prepare a resume and line up interviews and transportation, and Michael ran with it, impressing his prospective employer so much that he was hired on the spot as a security guard in a gated community. “He was extremely proactive and had a great attitude,” Sarganis says.  Michael has served in this job for around three years.

Whether a job seeker needs heavy support during and after the employment process or, like Michael, is able to move forward without much contact after placement, R2W is equipped to deliver the appropriate level of help for people who want to be gainfully employed despite their limitations.