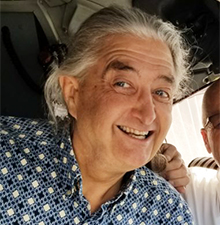 Rob founded Project: Return To Work Inc. (R2W) in 1998 after battling a terminal illness. In 1994 Rob was given a year to live, but he persevered and the experience motivated him to dedicate his life to helping disabled Americans overcome their own disabilities and return to work. Rob is a tireless advocate for vocational rehabilitation programs. Often Rob travels to civilian and military events where he gives motivational speeches and introduces R2W’s services to wounded civilians, soldiers, and their spouses.

At R2W, Rob performs the duties of Chief Executive Officer and has grown R2W from a grassroots startup in Boulder, Colorado to several notable government contracts and prestigious nationwide grants. Rob is continually reaching forward in the rehabilitation process to provide more effective early-intervention services for Americans with disabilities.

Rob’s service to R2W and its clients is part of his own rehabilitation. It took him a long time to return to work full time, but as is the case for many disabled Americans, the outcome was worth it.

After regaining his health, Rob was in a car accident and diagnosed with a Traumatic Brain Injury (TBI) and Post Traumatic Stress Disorder (PTSD).  He was disabled again but refused to give up.  Since the accident, he has been undergoing exciting new rehabilitation therapies while board members and other caring mentors have helped him continue in his role as CEO.  Work tasks are part of his therapies that are giving him hope and meaning in life.

Rob earned his Bachelors and Masters Degrees in Computer Science and Electrical Engineer from the University of Colorado. Prior to R2W, he worked in Corporate America as a successful aerospace engineer.