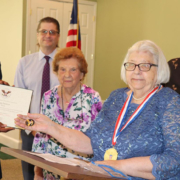 She was recipient of presidential Lifetime Achievement Award 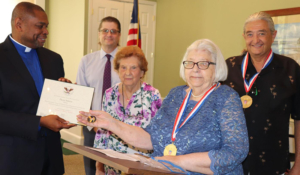 The Charlotte County community will have the chance to remember Frankie “Fran” Nixon, a President’s Lifetime Achievement Award recipient who helped some 18,500 find work through her son’s nonprofit.

Headquartered in Denver, Project: Return to Work’s mission is to find work for veterans, especially injured military service members and their spouses, disabled civilians and others in the community.

Nixon passed away on March 23, 2020, but due to the pandemic, her memorial service was delayed until this April 30. It will be held at 11 a.m. at First Church of Christ, Scientist in Englewood, followed by a luncheon at the Boca Royale Golf & County Club.

In 2018, Nixon was honored at Boca Royale where she received the highest level one can achieve for living a life of service for others — the President’s Lifetime Achievement Award, which was bestowed to her during the Trump administration.

At the time of her award, Nixon was in her eighties. She continued to help others until her death. From her nursing home in Castro Valley, California, she and Fern Ballou, executive secretary to her son, Rob Ray Brazell, were helping an injured Marine in the Middle East.

They helped him secure a good job in his small hometown prior to returning home from war, Brazell said.

Brazell, who is also a recipient of the President’s award, having received it under the Obama administration, recently shared the story of his mother’s life with The Daily Sun.

“My mother was born in Saratoga, Wyoming, on Sept. 7, 1932, to a pioneer ranching family,” he said. Nixon went to school there where she met her future husband, a Marine who served during World War II.

“After getting married, they continued to live on my grandparents’ ranch for two or three years, then moved to Rawlins, Wyoming where my father became a deputy sheriff and my mother operated a cattle-town hotel to supplement the family income,” he continued.

The family then moved to Cheyenne, Wyoming, “when my father joined the Wyoming Highway Patrol and my mother held another part-time job to supplement the family income while raising two rambunctious children,” Brazell said.

Nixon worked several jobs and was able to send her son to a private preparatory school. She had a long career with the Department of Interior, Bureau of Land Management.

“After 25 years of marriage — after I graduated from high school — my parents got a divorce and my mother moved to Colorado to further develop her career with the government,” Brazell said.

When Nixon retired, she worked for the Mother Church of the First Church of Christ, Scientist, in Boston. But perhaps “retired” isn’t quite the right word. After several years, Nixon moved to Florida (Port Charlotte), where she helped land a government contract for the Return to Work charity, her son said.

“She led the effort in Florida for several years until she retired again,” Brazell continued. “Then when I was run over by a truck, she rejoined the charity and worked for several more years with General Thomas Mills and Admiral Dick Young to keep it going while I underwent extensive rehab.”

Before Nixon passed, she told her son to use her Port Charlotte house to help veterans who are trying to get back on their feet to live a productive life.

Ironically, the first veteran to receive help through the intensive rehabilitation program lives next door to Dale Tinline, who was very close to Nixon.

The veteran is Tinline’s daughter’s boyfriend, a Marine suffering from PTSD.

Brazell arranged for them to get clean and move into the house, where they remain today.

Tinline fondly remembered Nixon, whom he called “Mom.” He said he did work around her home and tried to protect her from “scammers.” He said workmen would come to her door trying to get her to pay them for work she didn’t need, or for work Tinline would do for free.

“She baked cookies for my grandson; she was nice,” he said.

He was Nixon’s guest at the $1,000 per plate dinner when she received her Lifetime Achievement Award. He balked when she asked him to attend, saying he couldn’t afford the price, but she assured him as a guest, he wouldn’t have to pay. Tinline said he was proud of her that day.

Fern Ballou, who is 91 and worked with her friend to find work for the Marine returning home from war, also shared memories. She lauded Nixon’s service, saying she was involved with Return to Work “almost from the ground floor.”

Dixie Vyvey-Minear, who still resides in Wyoming, served as flower girl at Nixon’s wedding and her brother Ray was the ringbearer. She fondly recalled Nixon’s generosity, saying Nixon hosted the Vyveys’ 15th wedding anniversary celebration in town. Nixon also took Dixie, who is now in her 60s, to her first drive-in move. The saplings Nixon gave her are “now big trees,” Vyvey-Minear said.

How it all began.

Brazell said he formed the charity with the help of his parents, sister, and lifetime mentor, Malcolm D. Crawford, “out of my victory over AIDS nearly three decades ago.”

Brazell said he was given a year to live, but prior to that he owned a consulting firm to build rockets and satellites.

After given his diagnosis, “I did a lot of soul-searching.” He said he wanted to spend “what time remains to help other disabled people like myself.”

“Everyone in my immediate family is gone now, but their memory lives on in our charity,” Brazell said.

The TargetCircle Results are in!